Chef Jenn Crovato of Georgetown favorite 1310 Kitchen & Bar is marrying great food, music and art together for one special night.

On October 11, she will host Sound & Vision: Monumental Rock Photography, a showcase featuring 40 large-scale prints of some of the most notable musicians, songwriters and performers of the last half of the 20th century. The images were taken by 20 accomplished shutterbugs, and all will be available for purchase at the conclusion of the night.

As part of the event, Crovato will design a menu of small bites and drinks inspired by the heritage, music and culinary rituals of the musicians featured in the show.

A music lover, Crovato has always been fascinated by trailblazing women in the rock industry, finding similarities to what she’s experienced in her own field.

“Both music and food are created by artists, and there is a creative process and form of self-expression to both,” she says. “Ultimately, both are a way to foster relationships and form meaningful connections with others — it brings people together.”

The idea for Sound & Vision came about after Crovato was introduced to noted gallerist Chris Murray through a mutual friend when she was decorating 1310 Kitchen & Bar and looking for black and white photos of female musical artists.

“The first time we met, I brought along my boyfriend Peter — we all have a great love for music — and immediately hit it off,” she says. “Every time we got together and looked at photos, Chris had a personal story for each one. In addition, Peter always adds great commentary.”

So one day, Crovato realized that there should be more than the three of them in the room, and she came up with the idea for Murray to tell his stories in front of an audience.

“The stories are truly amazing and need to be shared,” she says. The event kicks off at 6:30 p.m., when everyone will gather at the bar before heading to their tables at 7 for a menu inspired by the musicians, which Crovato admits wasn’t easy.

“I started by creating a list of all the artists and their favorite foods,” she says. “To be honest, I found that most artists eat like 5-year-olds, from plain burgers to Kraft macaroni and cheese — and almost everyone loves fried chicken. Apparently, David Bowie consumed only red peppers and milk in the early years of his career. Ultimately, I loved the challenge. I selected hors d’oeuvres to share a variety of creative finger foods to enjoy. This allows people to eat without interruption so it’s less intrusive and the variety makes it more exciting.”

For example, inspired by vegetarian musicians George Clinton (who likes beans), and Michael Jackson (a vegetarian who didn’t like vegetables), Crovato is making curried chickpea cakes with spiced plum chutney.

“We will also share shrimp and grits representing Isaac Hayes and Son House, as well as meatloaf and mashed potatoes (with a lentil loaf, our vegetarian option) inspired by Tupac, Elvis Presley and Jim Morrison, who apparently liked mashed potatoes so much that he ate them daily,” she says. “I will also be using Isaac Hayes’ recipe for fried chicken from his cookbook, ‘Cooking with Heart and Soul.’”

Murray will speak for about 45 minutes, accompanied by a slideshow of photos shown on TVs stationed throughout the room so everyone can see the visuals.

The evening will conclude with a Q&A, and the rare vintage prints in the presentation will be available for a special-order purchase. And Murray’s newly released, signed hardback book (similar to the former sold-out limited collector’s edition), “Elvis and the Birth of Rock and Roll,” will also be available for purchase.

As the editor of the acclaimed title and the co-curator of the Smithsonian Institution’s former exhibition “Elvis at 21,” Murray brings his expert knowledge to Alfred Wertheimer’s photographs, capturing a young Elvis on the brink of stardom.

“The night gives people a sneak peek into Chris’ extensive collection, and a perfect opportunity to find that one-of-a-kind gift for the music lover in your life,” Crovato says. “I really hope everyone has fun. With a room full of music lovers, that should be easy.”

Enjoy this piece? Consider becoming a member for access to our premium digital content. Support local journalism and start your membership today.

A theatre buff and huge music fan, Keith Loria is a D.C.-based award-winning journalist who has been writing about the arts for more than 20 years. He started his career with the Associated Press and has written for Soap Opera Digest, Playbill and Music Review. He looks forward to 2021 and the theaters reopening! He’s the proud father of two daughters, who often accompany him on his theater outings. Visit his website at keithloria.contently.com.

Fri Sep 23 , 2022
— Recommendations are independently chosen by Reviewed’s editors. Purchases you make through our links may earn us a commission. Scarily enough—it’s nearly Halloween. If your desire to scatter your home and garden with gargoyles, pumpkins and cobwebs is already well underway, you’re in luck. Walmart has a huge selection of […] 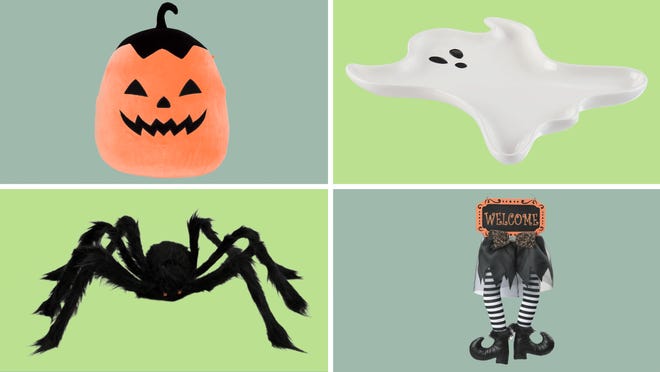