BROOKLIN — You, huddled over by the woodstove, leave it for a moment to gaze out your kitchen windows and then move on to look out all your windows. What do you see outside? What do you like? What area of your property needs structure or trees?

Cathy Rees, author of the recently released “Winterland: Create a Beautiful Garden for Every Season,” would argue for you to spend time year-round in your garden — not just summer.

“In the winter, everything looks so different,” the Brooklin resident said. “It’s like having two gardens. Why do we only focus on the summer one?”

“In the winter, this is your time to plan,” the gardener said. “You can look out your windows and think I need a focal point there. Then you need to stick to the plan in the summer and not get distracted by all the flowers.”

“The more I thought about it, the more I realized, our deciduous trees are leafless more than seven months of the year,” she said. “It’s a whole different animal because the leaves are all gone. It kind of snowballed from there.”

Rees co-founded Native Gardens of Blue Hill, a nonprofit organization whose mission is to promote the use of native Maine plants in gardens and encourage garden practices that support the ecosystem. The Bagaduce Music Lending Library’s native Maine plantings serve as the group’s flagship garden. The group also provides training for people interested in working in landscaping.

Rees also is a potter.

So, the Brooklin resident’s both ecological and artistic perspectives are represented in “Winterland.” The book includes sections on design, contrast and embellishments.

While researching what books had focused on the winter garden genre, she realized the majority focused on plants.

“That’s kind of unrealistic for us,” Rees said. “So, I thought I’m not going to focus on the plants so much. Everybody and every place has different plants native to their area, so I’m not going to have lists of plants. I thought it would be better to talk more about the garden design and just improving the structure of the garden.”

Back to your windows. Or, don your winter things and trudge outdoors.

“Observing and contemplating your garden while fully experiencing the period when the sun sets earlier and the temperatures rarely rise above freezing will inform your process,” Rees wrote in her introduction.

“You can have a very poorly designed garden in the summer when there’s lots of flowers and stuff,” said Rees. “You can’t get away with that in the winter because that’s all gone.”

In November of 2018, Rees was approached by a Princeton Architectural Press scout about writing a winter garden book.

“I never thought I’d write a book,” she said.

“The first winter was thinking about it a lot and trying to scout out gardens that might have opportunities for photographs,” she recalled.

The photography was the most challenging part of the process, Rees said. She recruited Lisa Looke, who manages the image library for the Wild Seed Project in Portland, to shoot. Most photographs were taken locally on the Blue Hill Peninsula but Rees and Looke did venture as far as New Hampshire for a few shots.

“Photographing a garden any time of year is difficult with the weather and light,” the author said. “Then we had to add all the winter weather on top of it. We’d get to a garden and we’d have to photograph it no matter what. A lot of times, it was pretty cold. Lisa had her snow pants. I had seen her photographs, so I thought she’d be good for this.”
“Being out in nature has always been important to me,” Rees said. “The other side of me is the more creative side.

I’ve always been interested in art and design. The garden is where those two things come together for me. You can be creative with nature in the garden.”

“I’m always bringing my curiosity to the garden,” Rees said. “If I put this plant with that plant, are they going to cohabitate nicely? If I prune this way, what will happen?”

Having a good structure to your garden design is more important for the winter seasons, said Rees. “The best strategy would be to plan a garden for winter. Get a structure. Get your paths figured out and where you want to sit. Get those elements in place. Then in the summer you can just add more flowering plants. You’ll have a functioning garden winter and summer.”

Rees said she wants people to know they can take an incremental approach to adding elements to their gardens, which will be richer for the time it took.

“I feel like some of the gardens that were built over a really long time, I felt were the most beautiful,” she said. “It’s hard when a person installs a garden based on a design and they think it’s done. That usually doesn’t serve them that well. If a person thinks about what serves them each year — that makes a compelling garden.”

“You basically make your plan in the winter, stick to it in the summer, observe,” and then repeat that process year 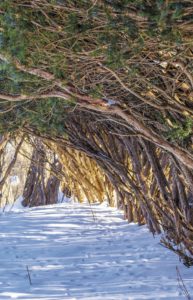 An old cedar hedge, pruned above deer height, creates an intriguing passageway in the winter landscape.

after year. “Eventually it will improve and be something you’ll really enjoy.”

Some of Rees’ favorite things for the garden:

Small trees such as witch hazel, ironwood and striped maple, which are good for either an understory if you have lots

of tall trees or if your yard is really small.

For shrubs, Rees calls bayberry “amazing. The wildlife love it. It’s just so vigorous and beautiful.”

“Bush honeysuckle — it’s another really nice shrub that doesn’t get too tall and looks great all summer long,” the gardener said. “In the winter it has these arching stems.”

For ground cover, barberry, which stays green year-round and has red berries, is one of the best ones, she said. “Our native juniper (Communus)” is another. “That’s a nice ground cover because it has a really pretty cover. It can be a bit prickly, so you don’t want to put it next to a walking path.”

Rees herself was inspired by some of the garden fences she included in her book.

In Brooklin, her own garden is surrounded by woods.

“I’d like to divide off part of it to make a more enclosed garden,” she said. That was the one thing I was going to do. By making a special little courtyard garden, that would add a lot to my view out the kitchen window.”

News Reporter Jennifer Osborn covers news and features on the Blue Hill Peninsula and Deer Isle-Stonington. She welcomes tips and story ideas. She also writes the Gone Shopping column. Email Jennifer with your suggestions at [email protected] or call 667-2576. 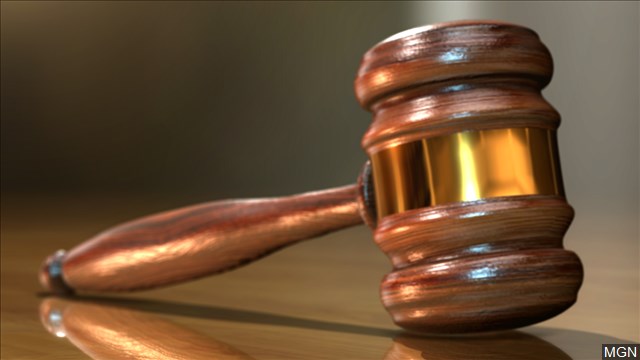